The LGBTI Elders Dance Club is an initiative by All The Queens Men and is designed to bring together lesbian, gay, bisexual, transgender and intersex elders and their allies for an evening of fun and relaxed socialising – and a little bit of jitterbugging.

The brainchild behind the LGBTI Elders Dance Club is Tristan Meecham, a performance artist with no prior experience working in the ageing field. But when he started considering the ageing LGBTI community he realised there was something missing – a sense of celebration. Older LGBTI people are increasingly been included in research projects, and after much advocacy and persistence their needs are finally beginning to be considered by aged care and other health services providers. However, Meecham felt that the LGBTI elders’ resilience and strength was not necessarily being acknowledged, and not in a way that captured the uniqueness of the community.

As Meecham points out, these are people who have lived through a time when homosexuality was criminalised and seen as a psychological illness that could be ‘cured’. For many people, entry into aged care or the need to rely on community service organisations for help at home is a confronting time – even more so if you’re worried how you will be treated because of your sexuality or gender identity. 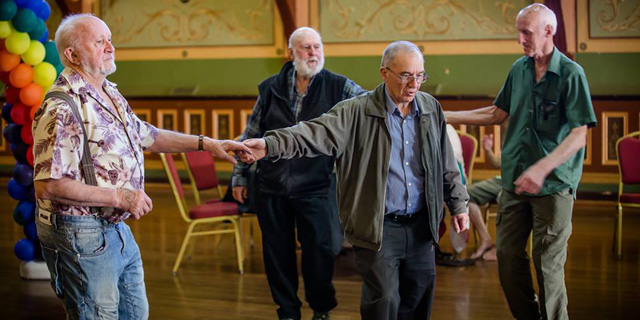 ‘I think that event spectacles borne out of a performance culture have the capacity to shift something for the moment,’ says Meecham. He devises art activities that audiences are encouraged to participate in because he believes that’s the best way for people to really be involved. His next major project is The Coming Back Out Ball, which will take place at the Melbourne Town Hall in October 2017. It will be an event of celebration and performance for and by elders of the LGBTI community, and it will also be a way for people to share stories and experiences.