Trends of social exclusion in Australia

Development of a Social Exclusion Monitor 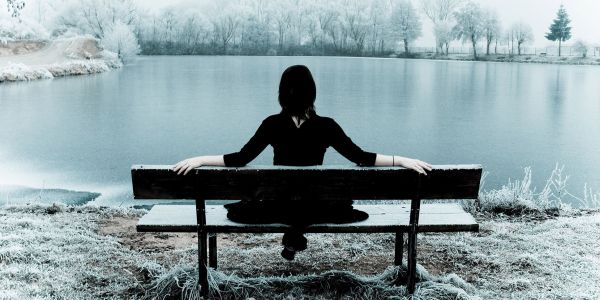 In 2008, the Brotherhood of St Laurence (BSL) in collaboration with the Melbourne Institute of Applied Economic and Social Research (MIAESR) commenced a research project to develop a method to measure the extent and evolution of social exclusion in Australia. In contrast to one-dimensional poverty measures such as those based on income or consumption, the social exclusion approach to disadvantage explicitly recognises the importance of multiple and interrelated factors in determining the capacity of individuals to fully participate in society.

Data on these indicators come from the national Household, Income and Labour Dynamics in Australia (HILDA) survey. Since 2001, the HILDA survey has annually collected detailed socioeconomic data for a nationally representative sample of the Australian population. The data are transformed into a summary measure of exclusion that ranges between 0 and 7, where 7 indicates the highest level of social exclusion. 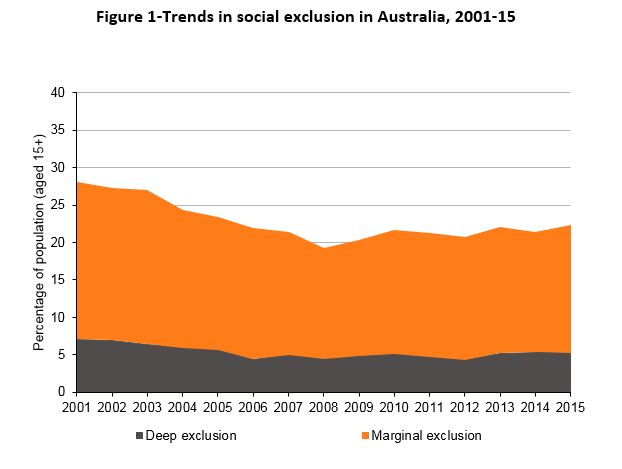 Trends in social exclusion over the period 2001 to 2015 are presented in Figure 1. It shows the prevalence of marginal (score greater than 1) and deep exclusion (scores above 2) amongst those aged 15 years and above. Levels of social exclusion steadily declined between 2001 and 2008, a period characterised by strong economic and employment growth. The improvement observed for many of the employment indicators between 2001 and 2008 clearly contributed to explain the drop in the incidence of marginal and deep exclusion over that period. Thus, for instance, the proportion of people living in jobless households and the number of individuals marginally attached to the labour market significantly fell between 2001 and 2007.

The positive trends in social exclusion changed with the Global Financial Crisis (GFC). Even if Australia was less affected than other high-income countries like the U.S. or European countries, the negative consequences of the GFC can be observed in the trends of social exclusion. The prevalence of marginal exclusion has been increasing since 2007, so that by 2015 the levels of marginal and deep exclusion were above the levels observed prior to the GFC. The impact of the GFC on employment and household income is a likely explanation for this increase.

Research carried out by the BSL and the MIAESR consistently shows there are certain groups of Australians who are more likely to experience social exclusion than others. These include Indigenous people, older Australians and the long-term unemployed, households affected by joblessness and disability (not just individuals with disabilities themselves), and people living in highly disadvantaged areas and public housing tenants. These groups are at a higher risk of experiencing deep and persistent social exclusion as they are less likely to move out of exclusion once they get in and are also more likely to return to it once they experienced an exit.

[Source: Dr Francisco Azpitarte, Brotherhood of St Laurence (BSL) and the Melbourne Institute of Applied Economic and Social Research (MIAESR) at the University of Melbourne]