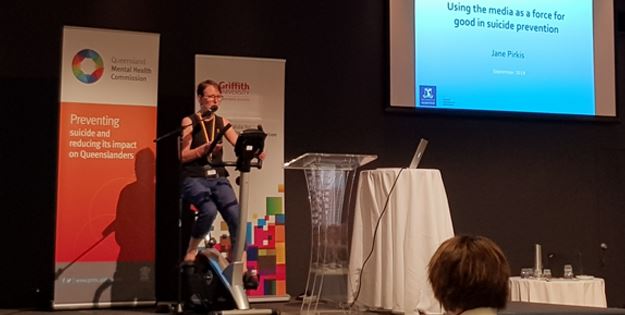 Professor Jane Pirkis recently delivered a presentation at the Community Forum for World Suicide Prevention Day in Brisbane. Nothing so unusual about that, but she did it while riding a bicycle! She was raising awareness about suicide prevention as part of the Cycle Around the Globe campaign which is organized by the International Association for Suicide Prevention and runs from World Suicide Prevention Day (September 10th) to World Mental Health Day (October 10th). Cycle Around the Globe is designed to increase awareness about suicide and to raise funds for suicide prevention activities in low and middle income countries. Last year, cyclists of all ages and fitness levels from around the world collectively circumnavigated the globe nearly 16 times, so the challenge is on to beat that. If you're interested in taking part yourself, you can find out more here - https://www.iasp.info/wspd2019/cycle-around-the-globe/

P.S. Jane clocked up 5kms during her presentation.