Scaling up methadone treatment for people who inject drugs The state of Manipur in Northeast India has been characterised by the dual public health problems of illicit injecting drug use and consequent HIV and hepatitis C infection for more than two decades. During the month of April, Associate Professor Michelle Kermode from the Nossal Institute and Dr David Jacka from Monash Health were working in Manipur to strengthen the delivery of methadone treatment for people who inject opioid drugs such as heroin. The provision of methadone to people dependant on opioids is a well-recognised therapy that helps people to stabilise their lives, improve their health and family relationships, and reduce criminal activity. India has been successfully implementing opioid substitution therapy (OST) using buprenorphine for many years, but the use of methadone as a substitute therapy is relatively new.

This project is a partnership between the Nossal Institute, the National AIDS Control Organisation, and the Regional Institute of Medical Sciences (RIMS), with additional support from the Manipur State AIDS Control Society, the National Drug Dependence Treatment Centre, the Public Health Foundation of India and the Emmanuel Hospital Association. The project commenced with two sensitisation workshops, one in Delhi on Friday 8 April and another in Imphal, the capital of Manipur, on Monday 11 April. Both sensitisation workshops were well attended by representatives from government agencies, non-government organisations, and the community of people who use drugs. The goal of the meetings was to provide an overview of methadone from a global and a local perspective, and to introduce plans for scaling up methadone in Manipur and ultimately beyond to other parts of India where the need is great e.g. the Punjab.

The Manipur meeting was followed by four days of training in the management and delivery of methadone maintenance therapy. The training was attended by approximately forty participants from Manipur and Punjab, and was delivered by Drs Ravindar Rao and Alok Agrawal from the National Drug Dependence Treatment Centre at the All India Institute of Medical Sciences in New Delhi, supported by Dr David Jacka who is an internationally recognised addiction medicine specialist.

Alongside the program to scale up methadone, we will be conducting a prospective, longitudinal cohort study that will involve following new clients for 12 months post registration with the OST program to assess their outcomes and to identify factors that help people to remain in the program and factors that contribute to drop-out from the program. The principal investigators are Dr Michelle Kermode (Nossal Institute) and Dr RK Lenin Singh (RIMS), who are supported on the ground by a small research team consisting of a Research Coordinator (Ms Tushimenla Imlong), a Research Officer (Mr Robedy Sharma) and a Research Assistant (Mr Lolikumar Angom). The study and some of the activities linked to the methadone scale-up are being funded through the Northeast India Knowledge Network grant awarded by the Bill and Melinda Gates Foundation. Lamp lighting ceremony at the opening of the methadone sensitisation workshop in the Habitat Centre, New Delhi 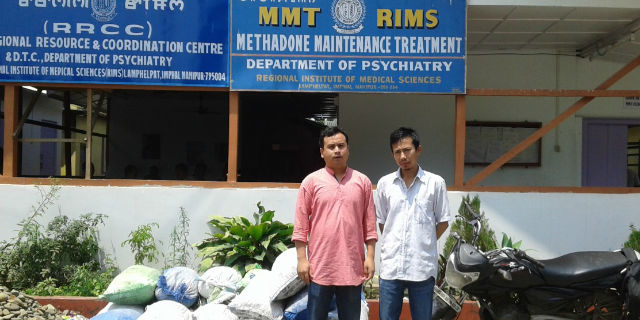