This article was first published on the Croakey blog. Read the original article.

The former Prime Minister of Australia Gough Whitlam noted in 1967 that one of the problems in discussing health policy in Australia is the lack of reliable official information.

While the Australian Government now routinely collects a mass of data through programs such as Medicare, two recent studies from the Centre for Health Policy, University of Melbourne, demonstrate that it still does not analyse and report information in a way that allows us to understand crucial aspects of our health care system.

Each time an Australian uses their Medicare card it generates a record of their health care use for the purposes of administering payments through Medicare Australia. Last year this generated around 380 million records, on how both patients and doctors use Medicare.

Importantly, Medicare collects information not only on the benefit charged (which is the Medicare covered part), but also on the fee doctors charge for each consultation.

While Medicare releases statistics, these are of limited value. For example, Medicare reports that from 2003 to 2014 the average out-of-pocket payment per service has increased from $21.60 to $54.60, while the number of services per capital increased from 10.5 to 13.5. There appears to be little recognition that Medicare benefits cover a wide range of services with a price tag varying from just a few to several thousand dollars per item.

This is an approach equivalent to providing statistics on the average number of items people buy when they shop at a supermarket and the average price of the items in the shopping basket. It’s hard to know how one can use such statistics.

A more useful way to look at prices and changes over time is to construct a price index based on a representative basket of items people usually buy and then look at how the overall price level changes.

It is important to recognise that while the price of some consumer goods may rise rapidly and that of others decline, the rate of inflation is a statistic that provides a summary of what is happening to prices overall in an economy.

A recent paper in Health Policy creates an index to look at changes in out-of-pocket costs using a basket of Medicare items that older Australians use. This is similar to the consumer price index, but shows how the out-of-pocket charges change over a five-year period of time (2008-12). It uses data from the AusHEART study, a representative cohort of people who were recruited when attending a GP in 2008 and who consented to have their Medicare data confidentially linked over time by Medicare Australia so it could be used for research purposes.

The resulting statistics allow us to track for the first time how out-of-pocket charges are rising in Australia and to break these changes down across different types of health care.

The key results are surprising.

Overall, the out-of-pocket cost incurred per Medicare service is not rising faster than inflation—it increased by 7.3% from 2008 to 2012. However, if you break this down into attendances (i.e. visits to doctors and medical specialists) and other services, the former are rising much faster than inflation (increased by 20.2%), but this upward trend is counteracted by a slight decline in the out-of-pocket costs associated with all other items (dropped by 14.0% – see figure). 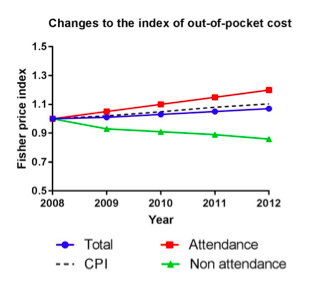 The story here is similar to what we observe for inflation in general: the overall gradual rise in the consumer price index (1.5% per year in 2016) involves upward movements in the prices of alcohol and tobacco (5.9%) and downward movements in those of communications (-5.9%).

The second study published recently in the MJA takes a different approach, focusing on the variation of fees charged for a single Medicare item (110): initial outpatient appointment with a consultant physician.

The results show that there is a wide variation across specialties and states, with median out-of-pockets in 2015 ranging from $56.70 for the specialty Geriatric medicine to $128.70 for Immunology/allergy, and people in the Australian Capital Territory paying more than $300 for Endocrinology compared to people in Queensland paying less than $200.

While there are a myriad of websites to provide consumers with information on prices for consumer goods such petrol, there is no equivalent information for consumers on what doctors in their area charge for services.

While Australian Governments for more than 30 years have routinely collected information on out-of-pocket costs incurred through Medicare, the statistics we have highlighted here are not routinely reported. Producing a wider set of Medicare statistics, in a timely fashion, would inform public debate and facilitate the evaluation of current policies.

For example, it is important to see what impact the freeze in the indexation of the MBS items and the cut in bulk-billing payments for pathology and diagnostic imaging are having on trends in out-of-pocket payments.

Current debates over these policies rely on changes in the bulk billing rate, which only emphasizes the paucity of reliable official information.

Gough Whitlam concluded his speech almost 50 years ago with a rhetorical question which can still be asked today: Can we expect a fundamental examination of our health services when the Government cannot provide an estimate of health costs in this country?

Professor Philip Clarke is Director of the Centre for Health Policy, University of Melbourne. Xinyang Hua is a PhD Student at the Centre.