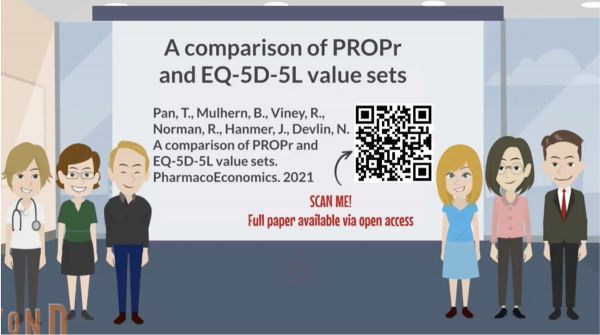 A new study on comparing EQ-5D-5L and PROPr value set by Professor Nancy Devlin and Dr Tianxin Pan from the Health Economics Unit has been published in the PharmacoEconomics.

The EQ-5D-5L and its value sets are widely used internationally. In the US and elsewhere, there is growing use of PROMIS, which has a value set (PROPr) based on the stated preferences of the US population. This paper compared the characteristics of EQ-5D-5L and PROPr value and found that they differ systematically.

First, the US EQ-5D-5L utilities range from − 0.573 to 1, whereas PROPr values for PROMIS-29 + 2 range from − 0.022 to 0.954. Second, in the US EQ-5D-5L value sets, pain is the most important dimension whereas in PROPr pain is one of the least important (apart from sleep disturbance). Third, classified based on severity across EQ-5D-5L descriptive systems and PROMIS-29 + 2 domain scores, PROPr has substantially lower values than EQ-5D-5L values for comparable ‘mild’ health states, but higher values for more ‘severe’ health states. Last, when one dimension is considered across its best to worst levels and all other dimensions are held constant at their best or moderate level, in EQ-5D-5L value sets, the greatest changes in utility occur between levels 3 and 4 (moderate and severe) problems; in PROPr that occurred between the most severe states and their descriptively adjacent health states. The paper concludes that it is important for decision makers and clinical triallists to be aware of these differences.

The paper is available via open access. The study has made an animated 6-min video to give an overview of the paper, which is available here.