Our cities are literally making us sick. We are sitting in worsening traffic jams, breathing in car fumes, living in isolated suburbs with no shops or services to walk or cycle to, and spending hours travelling to work because jobs are concentrated in unaffordable inner city areas.

By Andrew Trounson, University of Melbourne

The way we are planning our cities is causing a host of preventable health problems, from respiratory and cardiovascular diseases to diabetes and stress.

But we now have a blueprint for change. An international team of researchers, led by the University of Melbourne, have quantified for the first time the massive potential health benefits to be had if we finally just started planning our cities around the needs of humans and not cars. The researchers say it is a call for politicians to take action and set targets.

Published as three papers in The Lancet medical journal, the research was launched by the United Nations in New York on September 23, 2016, where the authors addressed a meeting of the UN’s Sustainable Development Solutions Network.

Central to the research is the promotion of “compact cities” in which people live in higher density neighbourhoods closer to local shops, public transport, services and jobs, and complemented by increased infrastructure for walking and cycling instead of relying on cars.

If the compact city blueprint was implemented they calculate that a car-dependent city such as Melbourne would cut the burden of cardiovascular disease by 19 per cent and cut the burden of type-2 diabetes by 14 per cent. Overall the equivalent of 679 years of extra healthy life would be gained in Melbourne per 100,000 people.

The gain for Boston in the US would be 826 healthy years, in Delhi the gain is 620 healthy years, and in Sao Paulo 420 healthy years. There is no set size for a compact city – what matters is the planning and design of safe walkable local neighbourhoods.

“For the first time this research quantifies the relationship between land use, urban design, population density and transport systems, and the impact they have on our health,” says lead author Professor Mark Stevenson, epidemiologist and Professor of Urban Transport and Public Health at the University of Melbourne. “It shows that by adopting a compact cities model that places an emphasis on active transport, we can achieve a huge reduction in the burden of chronic disease.”

The compact city model is based on increasing land use density, and the mix of uses on that land, by 30 per cent, while decreasing the average distance of housing to public transport by 30 per cent and increasing the use of non-motorised transport by 10 per cent. For example, jobs and services should be accessible within 30 minutes of home by public transport. Homes should have bus and train stops nearby, within no more than 400 metres and 800 metres respectively.

“We have been planning for the car for so long that it is clearly having a significantly detrimental impact on our health in the 21st century,” says co-author Professor Billie Giles-Corti, Lead of the Centre for Excellence in Healthy Liveable Communities at the Melbourne School of Global Population Health. 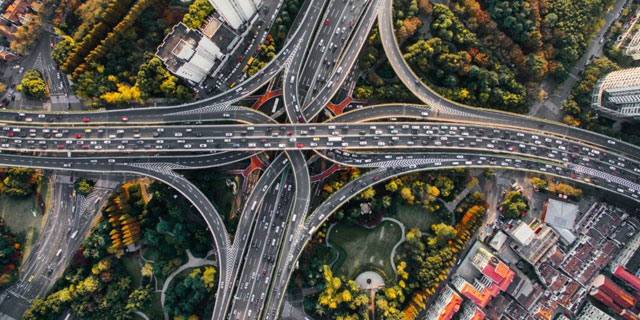 Planning cities around cars is damaging our health and is unsustainable. Picture: Pexels.

“City planning was key to cutting infectious disease outbreaks in the 19th century through improved sanitation, housing and separating residential and industrial areas. Today there is a real opportunity for city planning to reduce non-communicable diseases and road trauma and promote health and wellbeing more broadly,” Professor Giles-Corti says.

The researchers identified several risk factors in cities that are driving poor health outcomes, some of which are obvious such as traffic exposure, air pollution and physical inactivity. But there are less obvious factors like social isolation, diet, and noise, as well as crime and fear of crime. Road traffic noise, for example, has been shown to contribute to hypertension and cardiovascular disease. And crime, real and perceived, can be lessened if more people are on the streets walking to shops and services.

But Professor Giles-Corti warns that the compact city, and improved walking and cycling infrastructure, will only be delivered if there is a coordinated and whole of government approach to planning.

“Local urban design by itself won’t make a difference. It requires both local and regional planning and governments adopting integrated planning to create more liveable cities,” says Professor Giles-Corti. “It will need to be driven by politicians at the top – Prime Ministers and Premiers.”

That is where she says the power of quantifying the health gains and having a blueprint can make a real difference to the politics of achieving change. “It is all part of the process of getting action and providing the evidence that shows we can’t ignore this any longer.”

“This study is only the beginning as we only studied a limited number of pathways – the health impact is likely to be much greater.

The researchers have already identified a suite of benchmarks that it wants politicians to adopt and monitor in order to drive the momentum for change.

Such benchmarks include the implementation of pollution restrictions to enhance air quality, setting an area target for the ratio of jobs to housing, embedding walking and cycling routes in planning and building codes, setting targets for having public transport links near homes, setting a percentage requirement for the amount of urban land reserved for open spaces, and adopting health targets for reducing diabetes and respiratory and cardiovascular disease and increasing physical activity.

Professor Giles-Corti says there already emerging social pressures for change coming from young people who increasingly value the benefits of higher density inner city living, as well as from older people wanting to retire close to services and shops. But she believes the biggest driver for change is that the compact city is simply fairer.

She notes that only those who can afford to live in the inner city enjoy the benefits of the compact city. Those who can’t are living on an expanding urban fringe where transport, workplaces, shops and services are all harder to access.

“This is an equity issue and that should be an important driver for political change,” says Professor Giles-Corti. “Inner Melbourne is expensive because people want to live there. We need to spread amenity and services more widely, by increasing the density and reducing the spread of the city, then more people will have more opportunities to walk and cycle to daily destinations like public transport, shops and facilities.”

This article first appeared in Pursuit. View the original article.