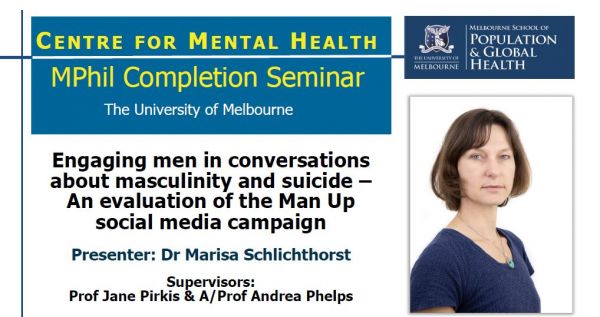 Man Up was an innovative media-based male health promotion and suicide prevention intervention that featured a three part television documentary, website and social media campaign. This presentation presents the findings from the evaluation of the Man Up social media campaign. Using two empirical studies Marisa explores the potential for social media to be used in health promotion with the view to generate and increase engagement and influence conversations on the issue of male suicide and its link to masculinity. The two studies analysed different data sources collected through two social media platforms: Facebook and Twitter.

Overall, the studies showed that the Man Up campaign messages were perceived positively across both Twitter and Facebook. Campaign content was widely shared on social media and positive feedback endorsed the campaign and highlighted the need to openly talk about male suicide and the stigma introduced by gendered practices. The analysis of Twitter hashtag keywords over time demonstrated strong uptake and sharing of campaign messages. However, the hashtag analysis could not find a lasting effect of increased engagement. Qualitative analysis of Facebook comments confirmed that the social media campaign triggered conversations about masculinity and suicide that might otherwise not have happened.

Using the combined findings across the two studies this thesis that social media interventions can be used successfully in engaging men in discussions about male mental health, suicide and gender norms and therefore demonstrate potential for suicide protective properties of social media. More research is needed to better understand how and where on the internet to best engage men, particularly men at high risk of suicide. Addressing these issues will require increased efforts to develop high quality interventions and evaluation designs for social media campaigns which follow a systematic framework for measuring effectiveness.