The annual trip that centres around the club’s match in Alice Springs at Traeger Park has become a highlight of the trachoma health promotion program.

The IEHU and MFC partnership came about when Professor Hugh Taylor visited Yuedumu back in 2010 with Jim Stynes, Liam Jarrah and a number of players and staff. Professor Taylor had noticed that there was a lot of the health promotion materials in the remote health clinics and the best featured football players. Having been a long-standing supporter of the Melbourne Football Club, he decided to reach out and see if the Club had any interest in supporting the IEHs trachoma program initially with some posters. Not hearing back on his first attempt, he decided to follow-up again. Professor Taylor then heard back from Cameron Schwab requesting a meeting to talk about it further, and the rest is history.

We’ve now been working with the club for nearly 14 years, and we greatly value the partnership and the opportunity to work together and travel to remote communities each year talking about trachoma, clean faces, ‘Milpa’s Six Steps to Stop Germs’ and holding footy clinics for local kids and their families. Each year, we also create new TV and Radio ads and posters featuring current players, trachoma health promotion messaging and of course our trachoma mascot, Milpa! Image: Samples of MFC posters from over the years and some behind the scenes photos from the filming of the 2022 CSAs.

In 2022, we were lucky enough to be joined by AFLW players Alyssa Bannan and Megan Fitzsimon and AFL player Andy Moniz-Wakefield on our visits to Nyirripi and Yuendumu.

On the morning of Friday 15 July, IEHU along with MFC players and staff boarded light planes in Alice Springs headed for Nyirripi. 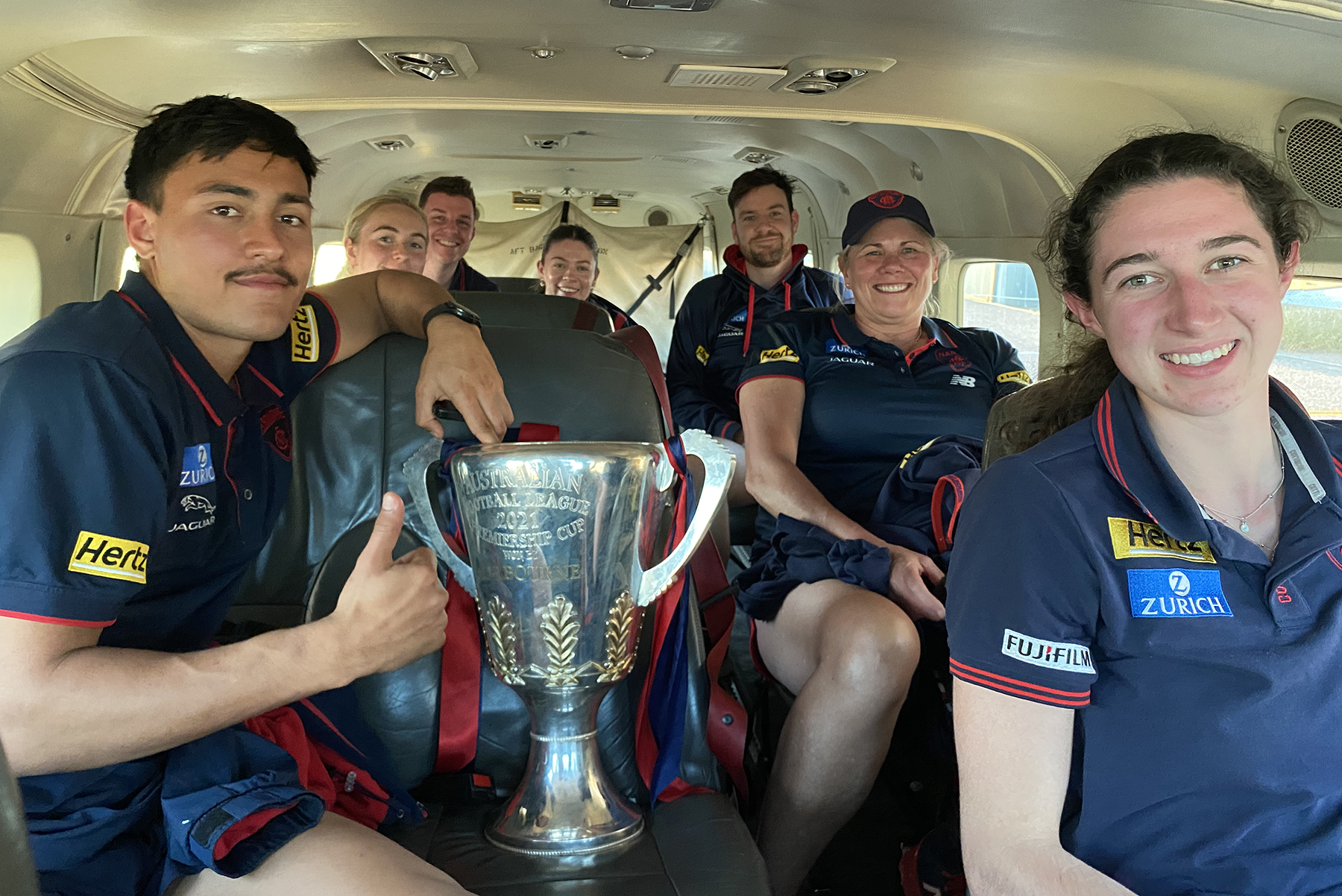 Image: The Premiership Cup had its own seat on the plane!

The last time IEHU and MFC got out to visit Nyirripi was in 2018, so it was safe to say the community were excited about the 2022 visit. The local footy team, the Nyirripi Demons have been avid supporters of MFC for years and regularly travel into Alice Springs for the annual match. Image: Milpa and the Premiership Cup were mobbed by the Nyirripi fans!

A big thank you to the Nyirripi community for having us – we look forward to next time we can visit with the club! Go the Nyirripi Demons!

The crew then jumped back on the plane and headed to Yuendumu.

Our first trip to Central Australia with MFC was back in 2010 to Yuendumu with then President, the late Jimmy Stynes and then player, Liam Jurrah, who was recruited from Yuendumu. As you’ll see from the image below, it was quite a wet day in Yuendumu when we first visited back in 2010!

Thankfully, we were treated to much nicer weather on this year’s trip!

IEHUs Trachoma Community Engagement Officer Lesley Martin spoke to community members about trachoma and ‘Milpa’s Six Steps to Stop Germs’ before MFCs President, Kate Roffey, spoke and thanked the Yuendumu community for having us on the day. Kate even remarked that it seemed Milpa the trachoma goanna was more popular than the AFL premiership cup. It’s good to see Milpa’s celebrity status in Central Australia is still strong! A big thank you to the Yuendumu community for having us – we look forward to next time we can visit with the club!

Celebrating the Grassing of the Santa Teresa Oval

On Saturday 16 July, IEHU headed out to Santa Teresa to celebrate the grassing of the local footy oval, a project that MFC have driven and supported for a number of years. The trachoma team set-up a stall and had a range of ‘Clean Faces, Strong Eyes’ and ‘Milpa’s Six Steps to Stop Germs’ resources available for kids and their families. Lesley and Walter our Trachoma Community Engagement Officers also had mirrors and face wipes on hand, encouraging young ones to have a look in the mirror to see if their face was clean. After face washing, MFC and trachoma temporary tattoos proved to be a popular addition to lots of those clean faces! It was a great day out in Santa Teresa that culminated with a local footy match, with a few MFC staff members filling in at the last minute, including former player Matt ‘Wheels’ Wheelan.

The ABC were also in attendance and interviewed staff member Nick Wilson about trachoma. You can read the article here and watch the video and that also feature Senator McCarthy, below. 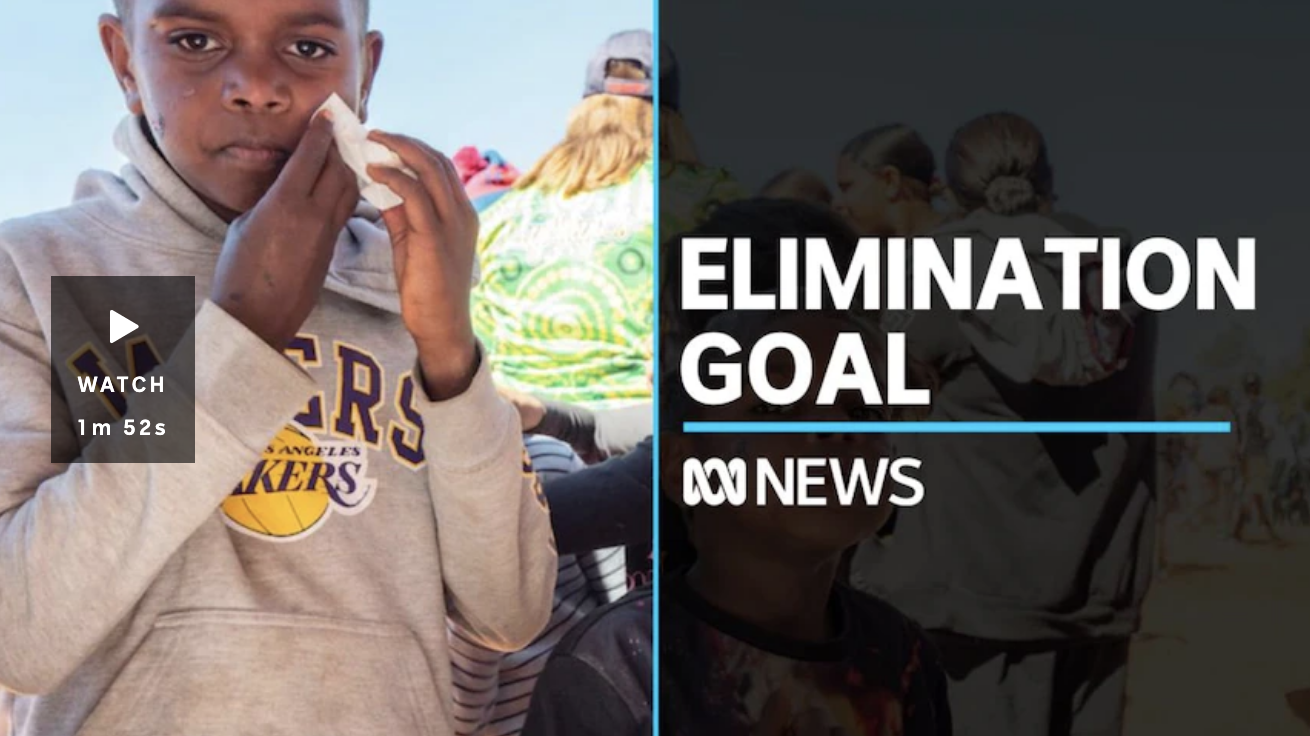 Thank you to the Santa Teresa community for having us and congratulations on your fantastic new oval! We look forward to next time we visit.

Footy for Life Session with AFLNT

Each week, AFLTNT run a session called ‘Footy for Life’ that allows footy fans who live with a disability to play their favourite game. Local legend and AFLNT staff member, Tommy Dutton, held a trial of the program back in 2021, which proved to be so popular that the program now runs 26 weeks a year.

On Sunday 17 July, IEHU and MFC headed down to ANZAC oval to help out with the ‘Footy for Life’ program. It was incredible to witness such an amazing program in action and hats off to all of those involved. We loved meeting the program participants and Milpa even made a special appearance. We had an absolute blast and can’t wait to head down and see the crew involved next time we are in Alice Springs. Image: IEHU had a great morning with the Footy 4 Life program!

The WANTA Cup is an annual sporting trip for kids from Yuendeumu, Ntaria, Papunya & Utopia and is designed to reward good school attendance. We attended a footy match at ANZAC Oval which was part of the WANTA Cup. Well done to all the young people involved and keep up the good work! The moment we had all been waiting for had come, MFCs annual match at Traeger Park in Alice Springs. This year, MFC took on the Port Adelaide Football Club.

Before the game, trachoma team members undertook health promotion activities, handing out ‘Clean Faces, Strong Eyes’ and ‘Milpa’s Six Steps to Stop Germs’ resources. Milpa the Trachoma Goanna also mingled with the crowd in the lead up to the match.

The young people from the WANTA Cup were selected to participate in the MFC Guard of Honour, lining up either side of the banner as the players run out on to the field. Our Trachoma Community Engagement Officers, Walter and Lesley, worked with the young people prior to the guard of honour to undertake hygiene practices to make sure there were lots of clean faces to be seen. Milpa also managed to get out onto the field to cheer on the players as they ran out on the field. Image: Milpa part of the Guard of Honour with the kids from the WANTA cup cheering MFC as they run on to the field. Video: The Demons running through the banner as Milpa and the kids from WANTA Cup cheer them on.

At half time, Milpa did his usual walk around on the inside of the oval, donning his MFC guernsey and showing his support for the club and taking selfies with MFC fans at the match.

Image: Milpa meeting his fans during half time at the footy!

Congratulations to MFC for winning the match, defeating Port Adelaide by 14 points. A great match and a great way to celebrate the week out in Central Australia.

To finish up the trip, IEH headed out to Mutitjulu and Uluru with MFC on the morning of Monday 18 July.

Image: Milpa spending time with the kids in Mutitjulu

When we arrived in Mutitjulu, we headed over to the local, which has a stunning backdrop of Uluru, for a footy clinic run by MFC. Trachoma Community Engagement Officer Lesley Martin also undertook hygiene activities with the kids and gave out trachoma resources.

Being out it Mutitjulu and seeing Uluru was an incredible way to finish off a great work working in partnership with the Club.

Thank you to the Mutitjulu community for having us, we can’t wait to get back out there and do it all again.

A huge thank you to our long-standing partners, The Melbourne Football Club, for their ongoing support of our trachoma work. We truly value the partnership and look forward to strengthening it in the future. Image: The Premiership Cup in Yuendumu. Image: Nick, Lesley and Walter in front of the 'Clean Faces, Strong Eyes' mural in Mutitjulu.

See a video of IEHUs time in Central Australia below. 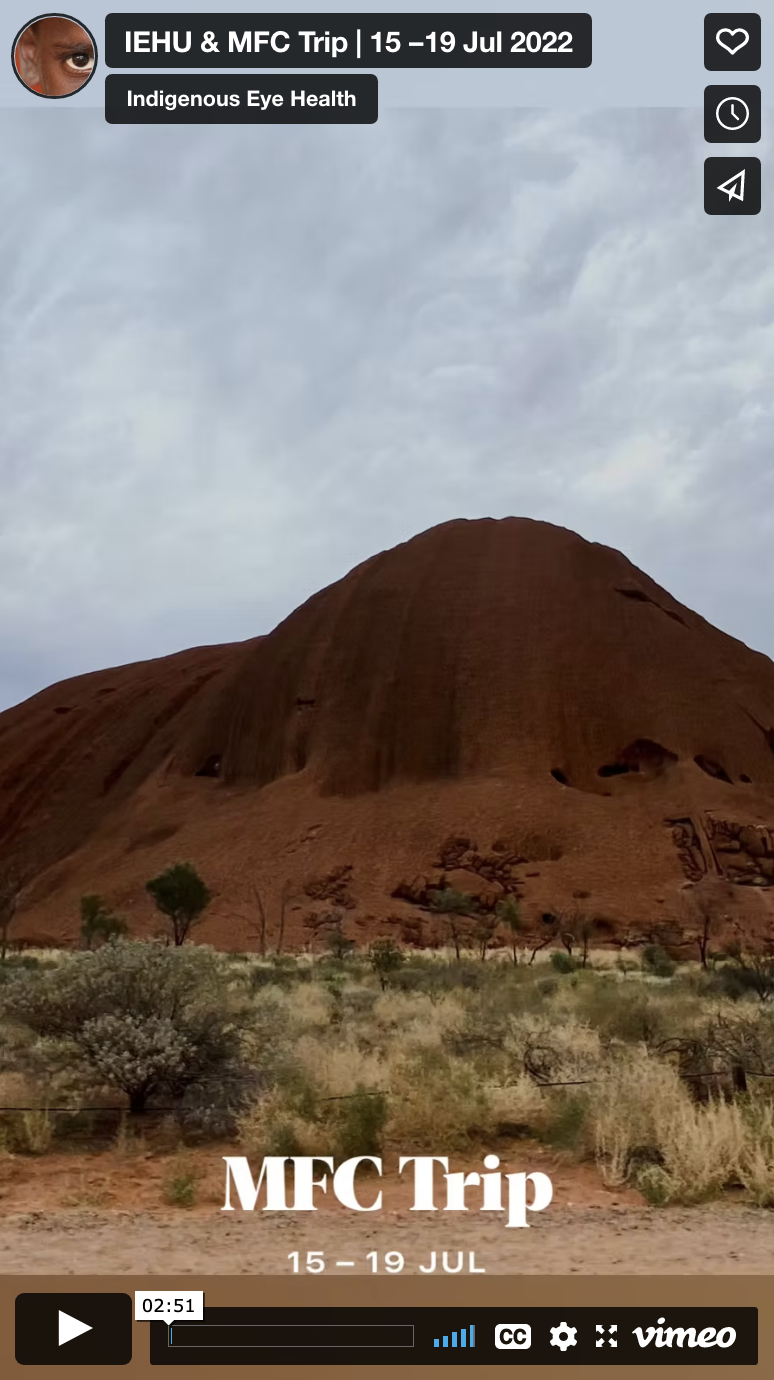 Video: A snapshot of IEHUs time in Central Australia.