The Drivers of Ageism

Ageism has a profound impact on how we age 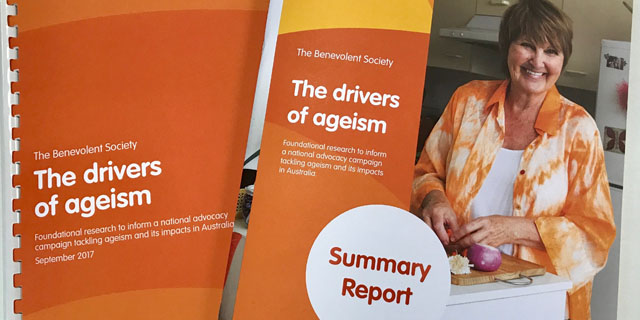 There is an abundance of evidence that ageism – articulated by Butler as prejudicial attitudes towards older people, old age, and the ageing process; discrimination against older people; and institutional practices and policies that perpetuate negative stereotypes - has a profound impact, not just on the way older people are perceived but on how well or otherwise we age.

Despite a growing understanding of this impact and the need to change the narrative and address the pervasive stereotypes, there is less evidence about the most effective ways to go about it.

A number of initiatives have attempted to challenge ageism in Australia but for various reasons these have not been sustained, have not been well targeted, or have had limited impact.  As part of its 2016-2019 Strategic Plan commitment to ‘campaign for the essential conditions for older Australians to age well’, The Benevolent Society is seeking to redress this gap. It has made challenging ageism and changing the narrative on ageing the focus of a forthcoming campaign called EveryAGE Counts, with a minimum ten year commitment.

The Benevolent Society commissioned research from Urbis to provide a robust evidence base to inform the strategic development of the campaign.  The research aimed to identify the drivers of ageism in the Australian context; the most effective ways to challenge ageism and pervasive negative stereotypes; as well as the most effective mechanisms and channels to activate attitude change.  It undertook a literature review as well as both quantitative and qualitative market research with 1,100 Australians across all age groups plus a booster sample of 300 people over the age of 65.

A key finding was that many of the negative views about older people and growing old are based on myths and misinformation - about how many require assistance, where they live, how many work, how they rate their health etc.

Age was also a significant differentiator in attitudes towards older people with older people tending to have more generous and positive attitudes than younger people; similarly it was women who were more likely to agree that ‘it is a privilege to grow old’.

Interestingly, there was no relationship between age and how important the issue of ageism is to the respondent. 47% of respondents across the age groups said ageism was extremely or very important with a further 33% saying it was moderately important.  From a campaigning perspective, a high proportion of neutral, rather than polarised responses, suggests great potential for change and shifting attitudes.

Workplaces, health care and aged care settings, families and communities and the media were identified as the top five domains to be prioritised for action.

The research report was launched by Age Discrimination Commissioner, The Hon Dr Kay Patterson on 28 September 2017 to coincide with the UN International Day of Older Persons on 1 October.

The research and other information is available at http://www.everyagecounts.org.au/