A personal experience of multi-generational living At morning tea at the office I discussed the concept of multi-generational housing – oh yes said Andrew “our place in Malta has been our family house for over 500 years. Before the war it was my grandfather’s parents place with four generations and between 15 and 20 family members. The older you were the closer to the ground floor you lived. There were a few communal spaces kitchen and dining room. The midday meal was the important meal of the day when those who had been working in the fields came in after their days work. The house is located close to the church and close to the market.”  Everything important was close at hand.

No doubt this concept of family, work and community living occurs in many places. I reflected on how it compared with my own experiences growing up in small rural town. I would visit my mother’s brothers and sisters in the city, seven families and Grandma who all lived in close proximity to each other and thought that it was wonderful being close to your cousins, and uncles and aunties as they did. Their streets were paved all the way, edge-to-edge with footpaths and front fences with gardens behind them! Grandma lived in the house behind and the cousins around the corner.

So in the early 1980’s when my parents were getting older it seemed natural for us to build a place for them on my sister’s property. The theory being that they could each go on holidays without having to worry about being alone or the care of the pets.  Secondly it enabled the grandchildren to have an easy connection with their grandparents and there were always shared tasks. The roles and relationships grew and changed over time. 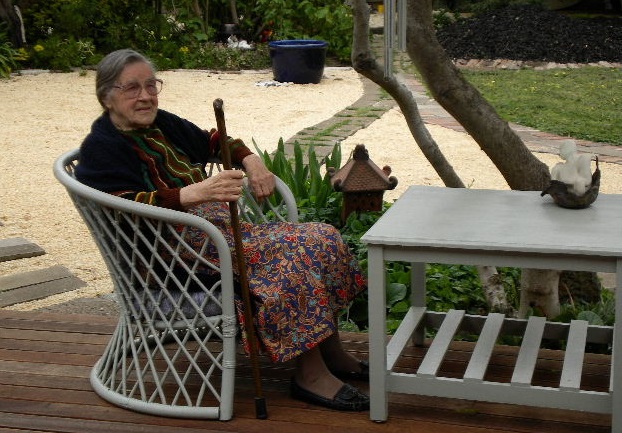 [Images: Nanny in the garden, Nanny and Poppy]

The two houses were quite separate with a garden in between.  There was a desire for a two-storey house to take advantage of the attractive northern views from the upper level so it was decided to include the view as long as the staircase was designed to be easy and as safe as possible to use. The house was designed to be adaptable so the ground floor rooms could be easily rearranged for accessible features. The two most important features were the stairs and the degree of separateness and privacy between the houses. The stairs were a measure of independence and the privacy was about control over your own life.

As health and hearing or other senses deteriorated, elders were sometimes easily irritated by noisy boisterous youngers. Both needed to be able get away. Physical and psychological boundaries needed to be clear and maintained. The success of the living arrangements depends on elder health, and this shared yet independent living arrangement facilitated the maintenance of health – good food and attention.

Relationships change organically as each adapts to the arrangement - elders grow older and children grow up. A few years after Dad died we modified parts of my sister’s house and traded rooms with the children who were still at home. This also worked well. However as is the way, life follows work and family members are now far flung.

It was interesting that the necessity for clear physical and psychological boundaries was also identified as important in the work we did for Wintringham*. (Wintringham is a not for profit provider of specialised aged care supporting the needs of the elderly who are homeless or at risk of homelessness).

At the end of the day it was the lived family experience that was the enduring outcome rather than a balance sheet of tasks: tolerance and sharing, and the fact that it is not always about you. The lessons of tolerance and understanding are what the grandchildren have taken with them into their lives.

* Since Wintringham’s inception in 1989 it has collaborated with Allen Kong Architect for their building work. During that time their projects have received many awards including the UN Scroll of Honour 2011, BSHF World Habitat Award 1997, International Union of Architects Friendly Spaces for All 2014 http://www.wintringham.org.au/built_environment.html