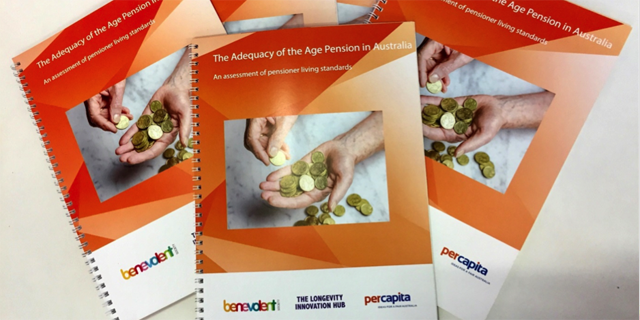 A research report released in September found that the current level of the Age Pension in Australia falls short of enabling an acceptable standard of living for recipients, with many pensioners suffering ‘substantial deprivation’.

The report, The Age Pension in Australia: an Assessment of Pensioner Living Standards, was prepared by progressive think-tank, Per Capita with research partners, The Benevolent Society and The Longevity Innovation Hub, headed by Everald Compton AM.

It also looked at the history of the Age Pension in Australia and its philosophical underpinnings, evolving from a ‘poverty alleviation’ approach to a contemporary ‘social contract’ approach that better reflects the ideals that citizens want to see in Australia.

While acknowledging the complexity of defining adequacy, the report finds the Age Pension is unable to provide a decent standard of living for pensioners who rely on it as their main source of income, and leads to extreme levels of poverty and hardship among some groups. Those renting in the private rental market and especially older women, are at the greatest risk.

The focus groups found many people experiencing distressing levels of deprivation, including turning off hot water for half the year and mashing foods to avoid dental work.

The report recommends the establishment of an independent Age Pension Tribunal to oversee and determine a just base rate for the pension. The proposed tribunal would function in a similar way to Fair Work Australia, which sets the minimum wage or the Remuneration Tribunal, which determines the remuneration of key commonwealth offices, including politicians.

Other recommendations include increases to Commonwealth Rent Assistance, the expansion of free dentistry and a range of measures, such as rebates and supplements, to improve the standard of living for Age Pensioners.

The Benevolent Society is convening a series of roundtable events with a range of stakeholder groups and individuals to progress implementation of the report’s recommendations.

The report was launched on 14 September at a live televised speech at the National Press Club.  The report can be downloaded from the Per Capita website or The Benevolent Society website, where it is also possible to learn more about the issue and sign up to a campaign to address Age Pension poverty.

[Source: Keryn Curtis is a Research and Policy Officer at the Benevolent Society. For further information, contact Keryn on keryn.curtis@benevolent.org.au. You can also download the report from Per Capita: http://percapita.org.au/research/adequacy-age-pension-australia/ OR from The Benevolent Society: http://www.benevolent.org.au/act/join--a--campaign/fix--pension--poverty ]